Nano Cleaning with Laser and Water 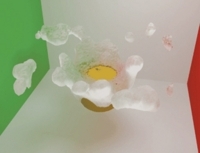 Modern optical and electronic systems are very sensitive to contamination by minute particles. A group of present and former FSU researchers are studying a nano scale cleaning system in which no chemicals are used, only water and the intense energy from a laser beam. The image shows a thin film of water, deposited over a dirt particle (yellow) adhering to the surface. Laser heating of the base layer of the water lifts both the water molecules and the dirt off the surface.

It might seem easier to remove small particles rather than large, but as size decreases, gravity loses its impact and very strong molecular forces start to dominate. A particle less than one thousandth of a millimeter in size can adhere to a surface with a force that is over a million times its weight.

Current micro-cleaning systems often use liquid chemicals, which are sources of contamination in themselves, and they may harm the surface of the material to be cleaned. Additional motivation for society and industry to find better alternatives is the worldwide phasing out of freon and its chemical relatives. Once popular cleansers, these are now known to deplete the ozone layer and contribute to the greenhouse effect.

Luckily, less damaging methods are on the way. One of the new cleaning techniques uses high energy density laser beams and water as the main components. In short, a thin water film (its thickness measured in nanometers to micrometers) is deposited on the surface that needs to be cleaned. The water film is brought to an explosive boil by the energy from a laser beam, and the dirt particle lifts from the surface. The water with the contaminants can then be removed by suction.

The method has proven to be very efficient, removing nearly 100% of the unwanted particles after a few repetitive treatments.

A group of present and former FSU scientists and students have investigated this cleaning system both in a chemistry/physics lab (Drs. Susan Allen and Sergey Kudryashov), and in simulation experiments performed on the FSU Eclipse supercomputer (Dr. Yousuff Hussaini).

To add even more to the understanding of the cleaning process, visualization researchers led by Dr. David Banks have used simulation data to make image sequences showing how the dirt particle is removed from the surface.

The explosive boiling of the near surface water film, and the subsequent particle removal, happen within a fraction of a second. Nonetheless, each computer simulation was run in 30,000 time steps, allowing an extremely detailed study of the molecular movements.

Several simulations were made, in order to study the effects of different temperatures and various water layer thicknesses.

In high-performance computer modeling, you can follow the movements of individual molecules, and you have perfect control of the system that you study. This resolution makes it possible to see things that cannot be seen in a wet lab experiment.

The models will not only make it possible to improve industrial techniques, but will also give us insights into fundamental physics. Because, as Professor Hussaini points out, even seemingly familiar processes like vaporization are not yet fully explained on the molecular level.