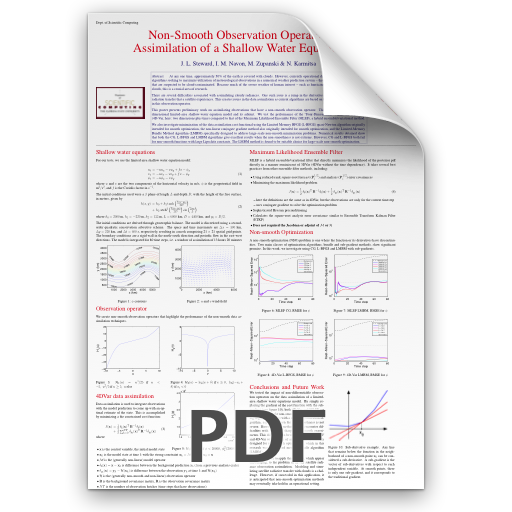 At any one time, approximately 50% of the earth is covered with clouds. However, currently operational data assimilation schemes – i.e. algorithms seeking to maximize utilization of meteorological observations in a numerical weather prediction system – throw away satellite observations that are suspected to be cloud-contaminated. Because much of the severe weather of human interest – such as hurricanes – occurs in the presence of clouds, this is a crucial area of research. There are several difficulties associated with assimilating cloudy radiances. One such issue is a jump in the derivative of the operator modeling the radiation transfer that a satellite experiences. This creates issues in the data assimilation as current algorithms are based on the assumption of smoothness in this observation operator.

This poster presents preliminary work on assimilating observations that have a non-smooth observation operator. This work is done using a two- dimensional limited-area shallow-water equation model and its adjoint. We test the performance of the “Four-Dimensional” Variational Approach (4D-Var, here: two dimensions plus time) compared to that of the Maximum Likelihood Ensemble Filter (MLEF), a hybrid ensemble/variational method.

We also investigate minimization of the data assimilation cost functional using the Limited Memory BFGS (L-BFGS) quasi-Newton algorithm originally intended for smooth optimization, the non-linear conjugate gradient method also originally intended for smooth optimization, and the Limited-Memory Bundle Method algorithm (LMBM) specifically designed to address large-scale non-smooth minimization problems. Numerical results obtained show that both the CG, L-BFGS and LMBM algorithms give excellent results when the non-smoothness is not extreme. However, CG and L-BFGS both fail for non-smooth functions with large Lipschitz constants. The LMBM method is found to be suitable choice for large-scale non-smooth optimization.