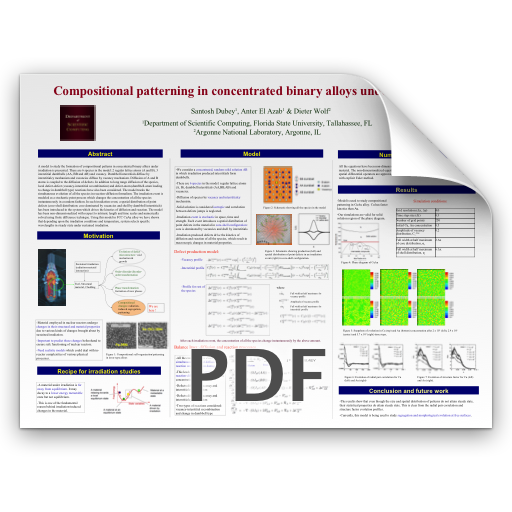 A model to study the formation of compositional patterns in concentrated binary alloys under irradiation is presented. There are 6 species in the model: 2 regular lattice atoms (A and B), 3 interstitial dumbbells (AA, BB and AB) and vacancy. Dumbbell interstitials diffuse by interstitialcy mechanism and vacancies diffuse by vacancy mechanism. Diffusion of A and B atoms is coupled to the diffusion of defects. In addition to long range diffusion of the species, local defect-defect (vacancy-interstitial recombination) and defect-atom (dumbbell-atom leading to change in dumbbell type) reactions have also been considered. The model tracks the simultaneous evolution of all the species in reaction-diffusion formalism. The irradiation event is modeled as a stochastic point process which changes the concentration of all the species instantaneously in a random fashion. In each irradiation event, a spatial distribution of point defects (core-shell distribution: core dominated by vacancies and shell by dumbbell interstitials) has been introduced in the system which drives the kinetics of diffusion and reaction. The model has been non-dimensionalized with respect to intrinsic length and time scales and numerically solved using finite difference technique. Using this model in FCC CuAu alloy we have shown that depending upon the irradiation conditions and temperature, system selects specific wavelengths in steady state under sustained irradiation.