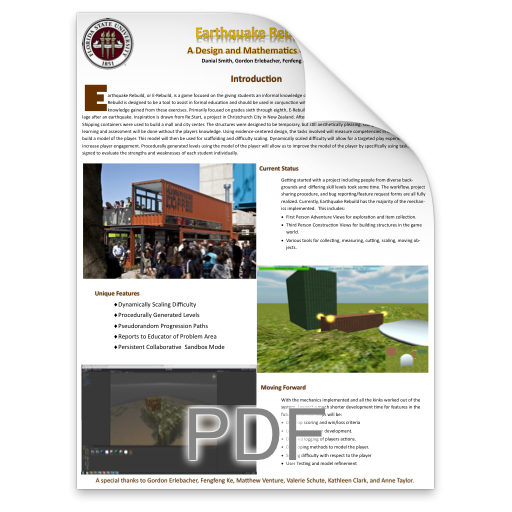 Earthquake Rebuild, or E-Rebuild, is a game focused on the giving students an informal knowledge of mathematics using architecture and design principles. E- Rebuild is designed to be a tool to assist in formal education and should be used in conjunction with traditional methods of teaching to reinforce the informal knowledge gained from these exercises. Primarily focused on grades sixth through eighth, E-Rebuild will focus on being fun. It is a game about rebuilding a village after an earthquake. Inspiration is drawn from Re:Start, a project in Christchurch City in New Zealand. After the 2011 earthquake, rebuilding quickly became a priority. Shipping containers were used to build a mall and city center. The structures were designed to be temporary, but still aesthetically pleasing. Using this story as a backdrop, learning and assessment will be done without the players knowledge. Using evidence-centered design, the tasks involved will measure competencies in certain areas to build a model of the player. This model will then be used for scaffolding and difficulty scaling. Dynamically scaled difficulty will allow for a targeted play experience and will increase player engagement. Procedurally generated levels using the model of the player will allow us to improve the model of the player by specifically using tasks de- signed to evaluate the strengths and weaknesses of each student individually.