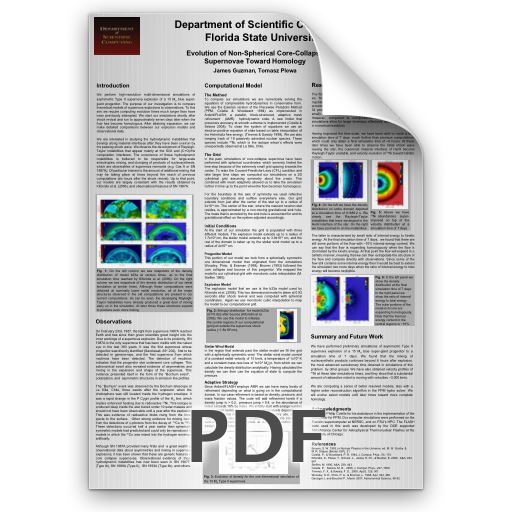 We perform high-resolution multi-dimensional simulations of asymmetric Type II supernova explosion of a 15 Mסּ blue super-giant progenitor. The purpose of our investigation is to compare theoretical models of supernova explosions to observations. To this aim we require computing evolution times much longer than have been previously attempted. We start our simulations shortly after shock revival and run to approximately seven days later when the flow has become homologous. After attaining expansion, we can make detailed comparisons between our explosion models and observational data.

We are interested in studying the hydrodynamic instabilities that develop along material interfaces after they have been overrun by the passing shock wave. We observe the development of Rayleigh-Taylor instabilities that appear mainly at the Si/O and (C+O)/He composition interfaces. The occurrence of these hydrodynamic instabilities is believed to be responsible for large-scale anisotropies, mixing, and clumping of products of nucleosynthesis, which are observables of supernova remnants (e.g. Cas A or SN 1987A). Of particular interest is the amount of additional mixing that may be taking place at times beyond the reach of previous computations (six hours after the shock revival). Up to that point, our models are largely consistent with the results obtained by Kifonidis et al. (2006), and observational features of SN 1987A.