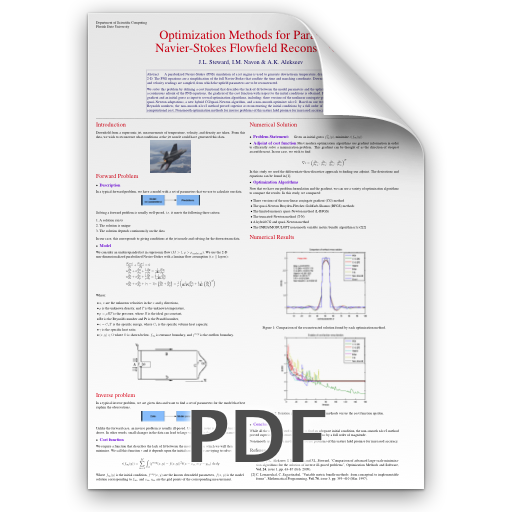 A parabolized Navier-Stokes (PNS) simulation of a jet engine is used to generate downstream temperature, density, and velocity values in 2-D. The PNS equations are a simplification of the full Navier-Stokes that conflate the time and marching coordinate. Downstream temperature, density and velocity readings are sampled, from which the upfield parameters are to be reconstructed.

We solve this problem by defining a cost functional that describes the lack-of-fit between the model parameters and the upfield initial conditions. Using a continuous adjoint of the PNS equations, the gradient of the cost function with respect to the initial conditions is obtained. From this point, we use the gradient and an initial guess as input to several optimization algorithms, including: three versions of the nonlinear conjugate-gradient (CG) method, three quasi-Newton adaptations, a new hybrid CG/quasi-Newton algorithm, and a non-smooth optimizer n1cv2. Based on our tests for a variety of different Reynolds numbers, the non-smooth n1cv2 method proved superior at reconstructing the initial conditions by a full order of magnitude but at a higher computational cost. Nonsmooth optimization methods for inverse problems of this nature hold promise for increased accuracy.