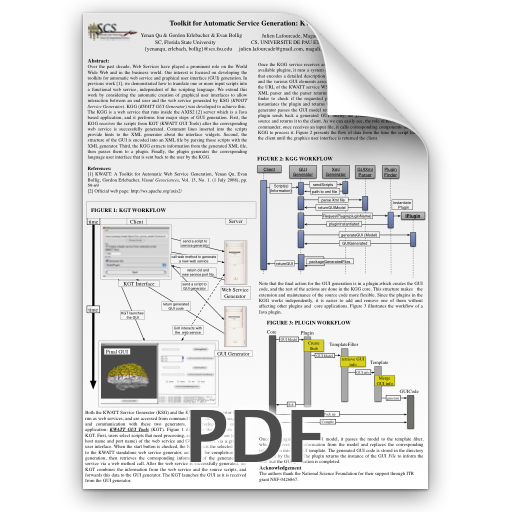 Over the past decade, Web Services have played a prominent role on the World Wide Web and in the business world. Our interest is focused on developing the toolkits for automatic web service and graphical user interface (GUI) generation. In previous work [1], we demonstrated how to translate one or more input scripts into a functional web service, independent of the scripting language. We extend this work by considering the automatic creation of graphical user interfaces to allow interaction between an end user and the web service generated by KSG (KWATT Service Generator). KGG (KWATT GUI Generator) was developed to achieve this. The KGG is a web service that runs inside the AXIS2 [2] server which is a Java based application, and it performs four major steps of GUI generation. First, the KGG receives the scripts from KGT (KWATT GUI Tools) after the corresponding web service is successfully generated. Comment lines inserted into the scripts provide hints to the XML generator about the interface widgets. Second, the structure of the GUI is encoded into an XML file by parsing those scripts with the XML generator. Third, the KGG extracts information from the generated XML file, then passes them to a plugin. Finally, the plugin generates the corresponding language user interface that is sent back to the user by the KGG.