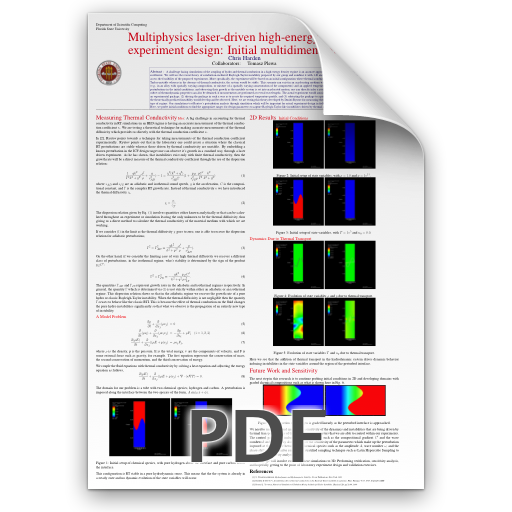 Achallengefacingsimulationsofthecouplingofhydroandthermalconductioninahigh-energydensityregimeisanaccurateapproximationofthethermalconduction coefficient. We will use the recent theory of conduction-mediated Rayleigh-Taylor instability proposed by our group and combine it with 1-D and 2-D hydrodynamic simulations to assess the feasibility of the proposed experiments. More specifically, the experiment will be based on an initial configuration where thermal conductivity can make a system Rayleigh- Taylor unstable whereas in the absence of thermal conductivity, the system would be stable. This scenario can exist in an accelerating medium with a graded chemical composition (e.g., in an alloy with spatially varying composition, or mixture of a spatially varying concentration of the components) and an applied temperature gradient. By introducing seed perturbations in the initial conditions, and observing their growth as the unstable system is set into accelerated motion, one can directly infer a coefficient of thermal conductivity. A subset of thermodynamic properties can also be obtained, if measurements are performed at several wavelengths. The actual experiment would consist of three parts: (1) manufacturing an experimental package, (2) driving the package in such a way as to create the required temperature profile, and (3) subjecting the package to a protracted acceleration during which the theoretically predicted instability would develop and be observed. Here, we are testing this theory developed by Dmitri Ryutov for measuring thermal conduction coefficients in this type of regime. Our simulations test Ryutov’s perturbation analysis through simulation which will be important for actual experiment design in fields such as laboratory astrophysics. Here, we probe initial conditions to find the appropriate ranges for design parameters to capture Rayleigh-Taylor like instabilities driven by thermal conduction.