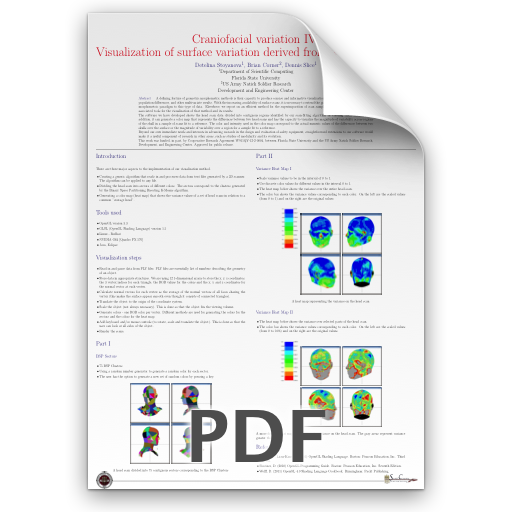 A defining feature of geometric morphometric methods is their capacity to produce concise and informative visualizations of population variation, between- population differences, and other multivariate results. With the increasing availability of surface scans, it is necessary to extend the graphical capabilities of the geometric morphometric paradigm to this type of data. Elsewhere, we report on an efficient method for the superimposition of scan samples. Here, we present methods and associated tools for the visualization of that method and its results.

The software we have developed shows the head scan data divided into contiguous regions identified by our scan-fitting algorithm by coloring them differently. In addition, it can generate a color map that represents the differences between two head scans and has the capacity to visualize the magnitude of variability across regions of the skull in a sample of scans fit to a reference. The color and intensity used in the color map correspond to the actual numeric values of the differences between two skulls over the surface or the magnitude of variability over a region for a sample fit to a reference.

Beyond our own immediate needs and interests in advancing research in the design and evaluation of safety equipment, straightforward extensions to our software would make it a useful component of research in other areas, such as studies of modularity and its evolution.

This work was funded, in part, by Cooperative Research Agreement W911QY-12-2-0004, between Florida State University and the US Army Natick Soldier Research, Development, and Engineering Center. Approved for public release.