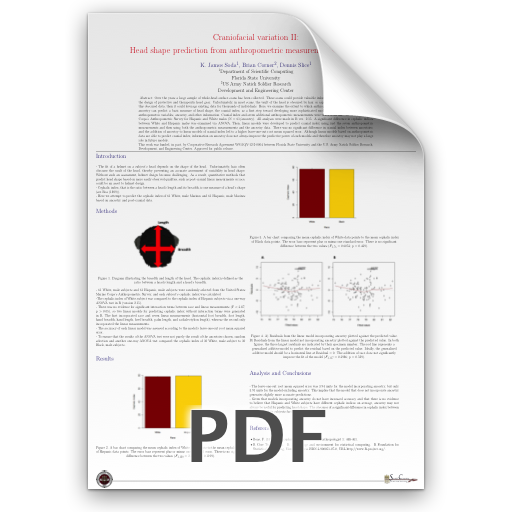 Over the years a large sample of whole-head surface scans has been collected. These scans could provide valuable information on head shape variation for the design of protective and therapeutic head gear. Unfortunately, in most scans, the vault of the head is obscured by hair or caps. If there were a model to predict this obscured data, then it could leverage existing data for thousands of individuals. Here, we examine the extent to which anthropometric variables and self-reported ancestry can predict a basic measure of head shape, the cranial index, as a first step toward developing more sophisticated models utilizing landmark coordinates, anthropometric variables, ancestry, and other information. Cranial index and seven additional anthropometric measurements were taken from the United States Marine Corps’s Anthropometric Survey for Hispanic and White males (N = 61/ancestry). All analyses were made in R ver. 2.15. A significant difference in cephalic indices between White and Hispanic males was examined via ANOVA. Then, linear models were developed to predict cranial index using just the seven anthropometric measurements and then using both the anthropometric measurements and the ancestry data. There was no significant difference in cranial index between ancestries, and the addition of ancestry to linear models of cranial index led to a higher leave-one-out root mean squared error. Although linear models based on anthropometric data are able to predict cranial index, information on ancestry does not always improve the predictive power of such models and therefore ancestry may not play a large role in future models.

This work was funded, in part, by Cooperative Research Agreement W911QY-12-2-0004 between Florida State University and the U.S. Army Natick Soldier Research, Development, and Engineering Center. Approved for public release.