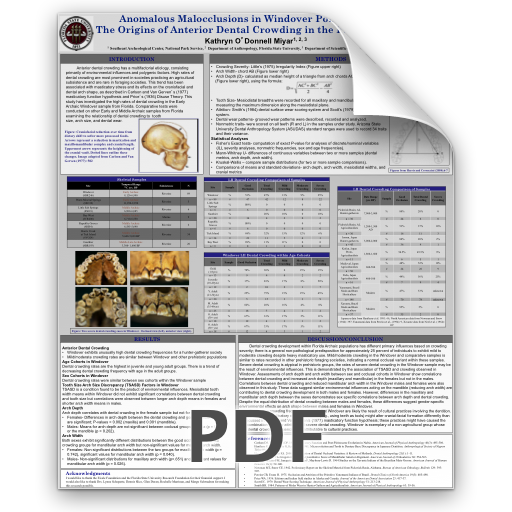 Anomalous Malocclusions in Windover Pond (8BR246): The Origins of Anterior Dental Crowding in the Florida Archaic

Anterior dental crowding has a multifactorial etiology, consisting primarily of environmental influences and polygenic factors. High rates of dental crowding are most prominent in societies practicing an agricultural subsistence and are rare in foraging societies. This trend has been associated with masticatory stress and its effects on the craniofacial and dental arch shape, as described in Carlson and Van Gerven’s (1977) masticatory function hypothesis and Price’s (1936) Disuse Theory. This study has investigated the high rates of dental crowding in the Early Archaic Windover sample from Florida. Comparative tests were conducted on other Early and Middle Archaic samples from Florida examining the relationship of dental crowding to tooth size, arch size, and dental wear.