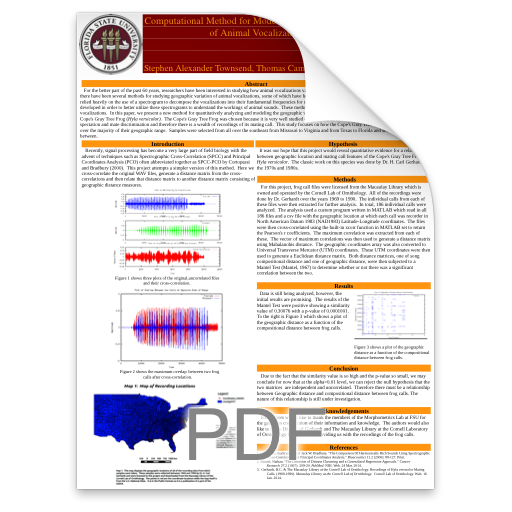 For the better part of the past 60 years, researchers have been interested in studying how animal vocalizations vary across the geographic range of a species. To that end , there have been several methods for studying geographic variation of animal vocalizations, some of which have become very common. For most of that time, these methods relied heavily on the use of a spectrogram to decompose the vocalizations into their fundamental frequencies for study. Various methods and statistical techniques were developed in order to better utilize these spectrograms to understand the workings of animal sounds. These methods have since become widely used in the study of animal vocalizations. In this paper, we present a new method for quantitatively analyzing and modeling the geographic variation of animal vocalizations using the mating calls of the Cope's Gray Tree Frog (Hyla versicolor). The Cope's Gray Tree Frog was chosen because it is very well studied due to its status as a model organism for studies on polyploidic speciation and mate discrimination and therefore there is a wealth of recordings of its mating call. This study focuses on how the Cope's Gray Tree Frog's mating calls vary over the majority of their geographic range. Samples were selected from all over the southeast from Missouri to Virginia and from Texas to Florida and several states in between.