Nano Cleaning with Laser and Water

Modern optical and electronic systems are very sensitive to contamination by minute particles. A group of present and former FSU researchers are studying a nano scale cleaning system in which no chemicals are used, only water and the intense energy from a laser beam. The image shows a thin film of water, deposited over a dirt particle (yellow) adhering to the surface. Laser heating of the base layer of the water lifts both the water molecules and the dirt off the surface. 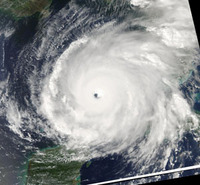 Hurricane Rita, on its way across the
Gulf of Mexico in September 2005.
Image courtesy: Liam Gumley/UW-CIMSS

Hurricane models are continuously upgraded and refined by mathematicians like Dr. Michael Navon at SCS. He and his FSU group, and collaborators across the US, are working on improving the mathematical foundation of the models. One of the questions Dr. Navon is currently working on is data assimilation. Simply speaking, this is about how to update your model with new data from observations, and about how much you should trust new measurements compared to the well-founded data from the model, which is based on thousands of earlier measurements.

A recent article in Science suggests that the number of whales before hunting started was much larger than anyone has suspected. These controversial results originated from calculations on genetic variation among today's whales. Peter Beerli at SCS developed the method and the computer tool used in the study.