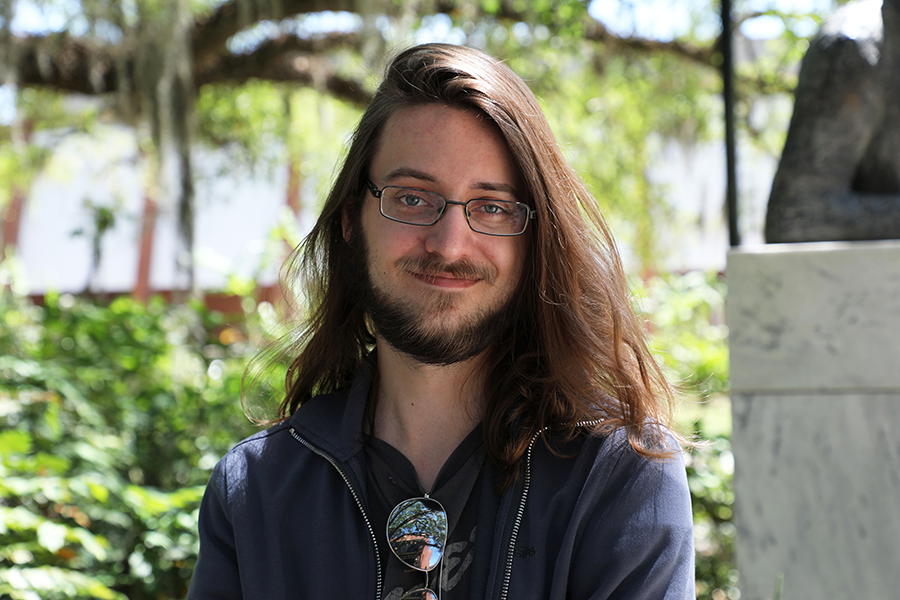 
When asked how it feels to be the first graduate of the Interdisciplinary Data Science Master’s Degree Program in Florida State University’s history, Luke Van Popering shrugged and chuckled.

“Presumably how it feels being the second graduate or third graduate,” Van Popering said, swiftly avoiding any opportunity to brag about the accomplishment.

In Spring 2022, Van Popering became the first to earn his IDS master’s degree, a feat considering the program officially launched in Fall 2021. The South Florida native earned his undergraduate degree from FSU’s Department of Scientific Computing in 2021 and decided to begin graduate school after learning about the new IDS program during conversations with some of the program’s founding faculty members.

“The IDS program was conceived by Dean Sam Huckaba three years ago and came to fruition while we were still in lockdown during the COVID pandemic,” said Gordon Erlebacher, FSU IDS program director.

Leveraging the power of the university’s heritage strengths in the STEM disciplines, the IDS program offers coursework and training at the graduate level in majors including computational science, computer science, mathematics, and statistics.

Erlebacher, the first to serve as director of the IDS program, mentored Van Popering throughout his undergraduate and graduate journey.

“There is no shortcut to expertise. It takes countless hours of practice, dedication, and hard work to achieve mastery,” Erlebacher said. “Luke’s work ethic is unrivaled. For example, we may discuss new algorithmic ideas in a research meeting, and Luke will follow up with an email outlining recent papers relevant to the proposed approach and often attach an original sample implementation within a few days. His dedication led to his graduating a semester early while satisfying all the requirements.”

Van Popering’s accomplishment is even more impressive considering the unexpected road he traveled. Just a few weeks into his freshman year of high school, after what he describes as a “confluence of terrible things,” Van Popering decided to chart his own path and give homeschooling a try.

“I ended up basically homeschooling myself for four years, and I always make a point to phrase it as ‘homeschooling myself’ because my parents were both quite busy,” Van Popering joked. “But I chose what I wanted to do. For most folks I think that would probably be a terrible thing, but I’m someone who enjoys learning new things and can schedule themselves well enough, even as a 14-year-old high school freshman. It all worked out well.”

So well, in fact, that Van Popering was accepted to FSU in 2017 and received the Benacquisto Scholarship for National Merit Scholars. He initially began his college career with a focus on physics, then developed a fascination with machine learning after taking an introductory course in scientific computing. He quickly made an impression on his professors.

“Luke is one of a kind,” Erlebacher said. “As an undergraduate student, he developed expertise in graph neural networks, a branch of machine learning with many applications that has gained much prominence in the past five years. Luke shines scholastically. He works relentlessly, learns quickly, has excellent math skills, and regularly proposes clever and quality ideas, all characteristics of prominent researchers,” Erlebacher said.

Erlebacher said Van Popering’s skills even exceeded his own in several areas, a result of his student’s passion and dedicated focus on mastering all facets of advanced machine learning. That drive helped Van Popering land an internship at NewSci Labs, a Tallahassee-based artificial intelligence software development company directed by FSU scientific computing alumnus Nathan Crock. After graduation, Van Popering is joining the NewSci team full-time as a machine learning engineer, a job for which he says his IDS coursework has prepared him well.

As the IDS program celebrates its inaugural graduate, Erlebacher and fellow program faculty members are eager to watch the FSU data science alumni family expand in the coming years.

“Witnessing the graduation of our first student after one year is very exciting and portends a great future,” Erlebacher said. “There are more than 500 students who applied to the program for Fall 2022.”