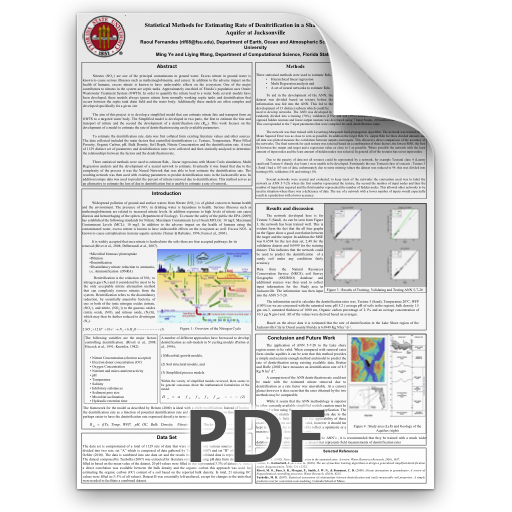 Nitrates (NO3-) are one of the principal contaminants in ground water. Excess nitrate in ground water is known to cause serious illnesses such as methemoglobinemia, and cancer. In addition to the adverse impact on the health of humans, excess nitrate is known to have unfavorable effects on the ecosystem. One of the major contributors to nitrates in the system are septic tanks. Approximately one-third of Florida’s population uses Onsite Wastewater Treatment System (OWTS). In order to quantify the nitrate load to a water body several models have been developed, these models always ignore nitrate form normally working septic tanks and denitrification that occurs between the septic tank drain field and the water body. Additionally these models are often complex and developed specifically for a given site.

The aim of this project is to develop a simplified model that can estimate nitrate fate and transport form an OWTS to a targeted water body. The Simplified model is developed in two parts, the first to estimate the fate and transport of nitrate and the second the development of a denitrification rate (Rdn). This work focuses on the development of a model to estimate the rate of denitrification using easily available parameters.