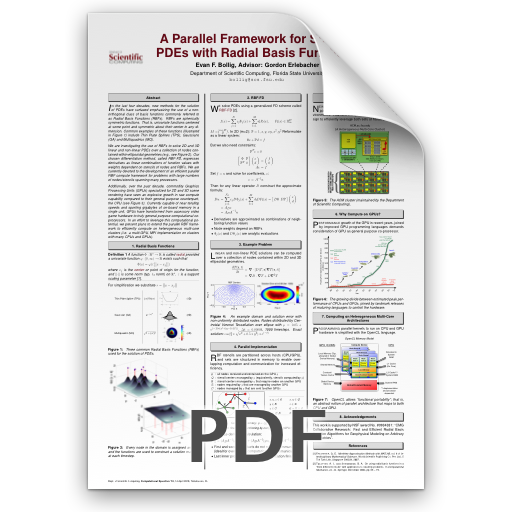 A Parallel Framework for Solving PDEs with Radial Basis Functions

In the last four decades, new methods for the solution of PDEs have surfaced emphasizing the use of a non- orthogonal class of basis functions commonly referred to as Radial Basis Functions (RBFs). RBFs are spherically symmetric functions. That is, univariate functions centered at some point and symmetric about their center in any di- mension. Common examples of these functions (illustrated in Figure 1) include Thin Plate Splines (TPS), Gaussians (GA) and Multiquadrics (MQ).

We are investigating the use of RBFs to solve 2D and 3D linear and non-linear PDEs over a collection of nodes con- tained within ellipsoidal geometries (e.g., see Figure 2). Our chosen differentiation method, called RBF-FD, expresses derivatives as linear combinations of function values with weights dependent on stencils of nodes and RBFs. We are currently devoted to the development of an efficient parallel RBF compute framework for problems with large numbers of nodes/stencils spanning many processors.

Additionally, over the past decade, commodity Graphics Processing Units (GPUs) specialized for 2D and 3D scene rendering have seen an explosive growth in raw compute capability compared to their general purpose counterpart, the CPU (see Figure 3). Currently capable of near teraflop speeds and sporting gigabytes of on-board memory in a single unit, GPUs have transformed from accessory video game hardware to truly general purpose computational co- processors. In an effort to leverage this computational po- tential, we present plans to extend the parallel RBF frame- work to efficiently compute on heterogeneous multi-core clusters (i.e. a multi-GPU, MPI implementation on clusters with many CPUs and GPUs).