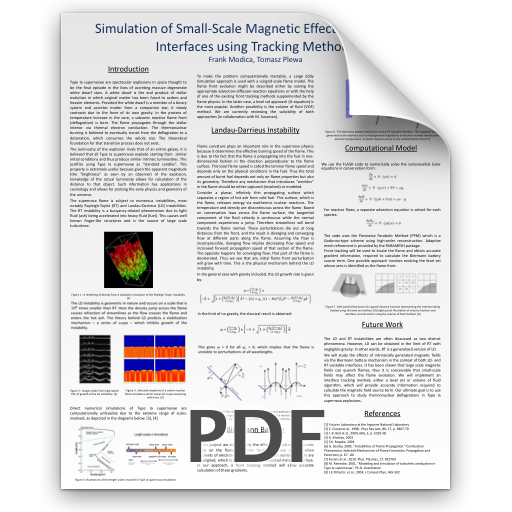 Type Ia supernovae are spectacular explosions in space thought to be the final episode in the lives of accreting massive degenerate white dwarf stars. A white dwarf is the end product of stellar evolution in which original matter has been fused to carbon and heavier elements. Provided the white dwarf is a member of a binary system and accretes matter from a companion star, it slowly contracts due to the force of its own gravity. In the process of temperature increase in the core, a subsonic reactive flame front (deflagration) is born. The flame propagates through the stellar interior via thermal electron conduction. The thermonuclear burning is believed to eventually transit from the deflagration to a detonation, which consumes the whole star. The theoretical foundation for that transition process does not exist.

The luminosity of the explosion rivals that of an entire galaxy. It is believed that all Type Ia supernovae explode starting from similar initial conditions and thus produce similar intrinsic luminosities. This justifies using Type Ia supernovae as “standard candles”. This property is extremely useful because given the apparent magnitude (the “brightness” as seen by an observer) of the explosion, knowledge of the actual luminosity allows for calculation of the distance to that object. Such information has applications in cosmology and allows for probing the early physics and geometry of the universe.

The supernova flame is subject to numerous instabilities, most notably Rayleigh-Taylor (RT) and Landau-Darrieus (LD) instabilities. The RT instability is a buoyancy-related phenomenon due to light fluid (ash) being accelerated into heavy fluid (fuel). This causes well known finger-like structures and is the source of large scale turbulence.