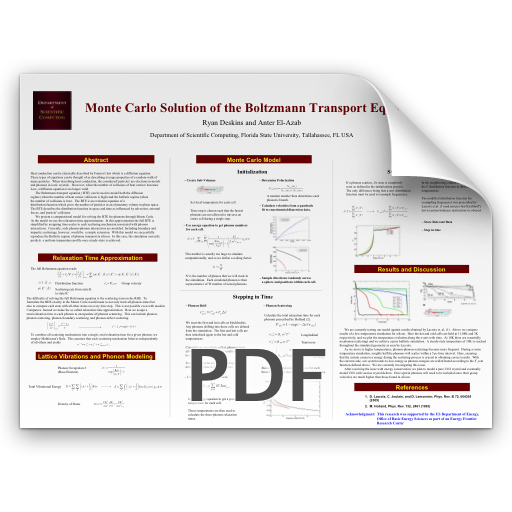 Heat conduction can be classically described by Fourier's law which is a diffusion equation. These types of equations can be thought of as describing average properties of a random walk of many particles. When describing heat conduction, the considered 'particles' are electrons in metals and phonons in ionic crystals.. However, when the number of collisions of heat carriers becomes Low, a diffusion equation is no longer valid.

We present a computational model for solving the BTE for phonons through Monte Carlo. In the model we use the relaxation time approximation. In this approximation the full BTE is simplified by assigning time-scales to each scattering mechanism associated with phonon interactions. Currently, only phonon-phonon interactions are modeled. Including boundary and impurity scatterings, however, would be a simple extension. With this model we successfully reproduce the Ballistic regime of phonon transport in silicon. In this case, the simulation correctly predicts a uniform temperature profile once steady-state is achieved.